PCHS started slow and made only five of their 14 shot attempts (36%) in the first quarter while never leading in scoring.  Charity Warder did make a basket in the first to tie the game at 6-6, and Cloey Sharp battled to get the last shot of the first stanza for a 10-10 tie.

Kira Bircher and Kierstin Taylor each hit a three to start the second quarter, followed by another two from Sharp, for an 8-point 18-10 lead. PCHS would never lose the lead again, but the Mavericks kept fighting back to the very end. Pocahontas led multiple times by 8 points and once by 9. JMHS pulled within two, 24-22, by the half. PCHS roared back for a 10-4 third quarter and a 34-26 lead going into the final frame.

Laila Calhoun would finish the game with a game-high double-double of 19 points, 11 rebounds, five deflections and three steals. Calhoun hit five of nine free throws in the fourth after hitting four of four in the third to assure the win. Monroe took the fourth quarter 14-11, with junior Karissa Hunnicutt nailing two treys (one at the buzzer), and senior Megan Boroski swishing one before she fouled out.

PCHS (8-3) hit nine of 18 free throws (all by Calhoun), and Monroe (4-6) made six of eight chances. Twin sisters Morgan and Megan Boroski led JMHS with 16 and 12 points respectively. Kira Bircher tallied seven points, six rebounds, three steals and three assists. Warder finished with six points, five rebounds and three blocks. Kierston Taylor also grabbed four rebounds and dished out four assists. Alexa Taylor added three assists, two rebounds and one block. Jerica Reed rounded out the scoring with four points and four assists. Sienna Bircher was under the weather and had to miss the game, and the team missed her offensive rebounds, finishing with only five versus 26 defensive boards.

PCHS (4-4) won the first quarter of the JV game 12-7 when Macaden Taylor scored eight of her eventual 13 team-high points. JMHS took the second 13-8 resulting in a 20-20 tie at the half. Monroe won the last two quarters for the 47-35 win. Monroe was led by two freshmen, Haley Hunnicutt and Sydney Hunt, each scoring 15 points, and both scored in every quarter. The next four high scorers for PCHS (5-4) were: Makenzie Moyers – 6, Tessa Kiner – 5, Sara Stull – 4 and Rayna Smith – 4. Macaden Taylor also produced nine rebounds, six steals, five blocks and six deflections, all team-highs. Allyson Alderman dished out five team-high assists.

#7 (AP) PCHS upset #3 Summers County January 10 behind a career effort by Kira Bircher: 28 points, 10 rebounds, five steals, four assists, three blocks, three deflections and two threes (five of these stats were the most for PCHS). Bircher also had her usual great defensive effort and was the only player in the game scoring every quarter and scoring 6 or 8 points each frame. This was only the second win by PCHS in years of playing Summers. PCHS upset SCHS in a huge shocker at PCHS last year 53-42. Charity Warder also had a double-double: 11 points, 10 rebounds and five assists. Laila Calhoun just missed a double-double with nine points, nine rebounds, three assists and four deflections (most). Alexa Taylor had eight rebounds and six assists (most). Kierstin Taylor tallied six points and three rebounds. Sienna Bircher had five points and five rebounds. Cloey Sharp had four rebounds in one quarter of play. Jerica Reed had five rebounds and one block.

PCHS came out of the locker room “ready to roll” after meeting with coaches Mike Kane, Allen Taylor and Chloe Bland. The Warriors shot 63%, making 10 of 16 field goal attempts, in the third for a 20-10 advantage and going into the final frame with a 44-32 lead. The Lady Warriors ended the quarter on a 6-0 run when Kierstin Taylor made two baskets for four points and Kira Bircher nailed her 10th two of the game.

Junior Riley Richmond nailed their team’s fourth trey to end the game and upped the Bobcats points to 52. Taylor Isaac finished the game with 18 points and made nine of 11 foul shots (82%), and junior Gavin Pivont ended with a double-double of 11 points and 10 rebounds. Sophomore post Maggie Stover came off the bench for nine points. PCHS (9-3) finished with 38 defensive rebounds to 22 for SCHS (8-3). 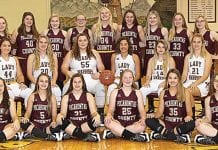