“It was one extraordinary event for Snowshoe, Pocahontas County and West Virginia” Rose said. “What a way to introduce the world to Nature’s Mountain Playground.  Snowshoe is estimating twelve-to-thirteen thousand attendees, so this makes it one of the largest events Snowshoe Resort has ever hosted, if not the largest. The crowd was magnificent. They were friendly, and they were there to enjoy the experience and root for their favorite racer. It was exciting.”

The CVB booth had a lot of activity during the event, as well.

“We were there where the cross country and the short-track racing took place” Rose said. “We had a great location; we got a lot of visitors, and we handed out a lot of Nature’s Mountain Playground swag. Visitors from around the world picked up our material and asked about other areas nearby to mountain bike.”

“Over thirty nations were represented in the races,” she said, “We saw folks from Germany, Poland, Austria, Switzerland and England. Some of them had been here before, but the vast majority of them had not been, and they just loved the entire area and intend to return. I heard just really wonderful and outstanding things about our community.  The campgrounds around the national forest were really full. People were actually parked at all the trailheads, riding the trails around the county. So, it just bodes exceptionally well for the fact that we are building this mountain bike destination. Not only did we get our IMBA (International Mountain Biking Association) designation in early August, but we hosted the World Cup at Snowshoe.”
Rose also talked about how the visitors felt about the mountain bike trails here.

“The few people who commented about the trails said they were in great shape,” she said. “A lot of the people come from cities and spend a lot of time on what I call ‘groomed trails’ that are specifically designed and built for city areas. So, what they were looking for and hoping to find here were back country experiences, the more rugged terrain that maybe they don’t have that much opportunity to ride in the more metropolitan areas where they are from.

“And they were not disappointed. They found what they wanted, and, of course, the weather being just magnificent was icing on the cake.

Rose went on to talk about the races.

“They had a downhill race, a short track race and a cross country race” she explained. “Within each of those races, there were a couple of different categories, Men’s and Women’s within all of them, and then you have the Junior Racers, the Olympic Racers and the Elite Racers. So, you had a variety of races, and in the end the people who stood on the (winners’) podium were literally from around the world. Kate Courtney, one of the very best mountain bike racers from America did win the overall World Cup for women.”

What impact did the World Cup have on the local tourism economy?

“We will see an immediate impact!” Rose said. “Not only did we have thirteen thousand visitors come to this event, but Red Bull TV broadcasted this around the world, so we are talking about exposure for Snowshoe, Pocahontas County and West Virginia to millions of viewers.

“I believe the visuals, the video footage, and the commentary about the area, the trails and the race course will drive some mountain bikers here. Obviously in the springtime when we begin our campaign for the (IMBA) Ride Center we will also begin seeing more impact.”

Manchin statement on the situation in Iran 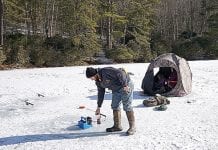