The salt rising bread story we ran a few weeks ago got a lot of people stirred up and created a lot of conversations.

We thought maybe our readers would enjoy hearing more about people who bake bread and who don’t mind sharing a favorite recipe with us.

Allen and Merrily Taylor live in Cook Town. They had been coming to Pocahontas County for 30 years. They moved here permanently a few years ago when they retired. Merrily was a Neonatal Intensive Care Nurse, and Allen worked for the Huntington Fire Department.

“It took me a minute to remember why we came to Pocahontas County the first time – it was Mike Bing,” Merrily remembered.
“We knew him from the West End of Huntington and from the ‘InnBetween’ bar downtown.

“He was selling his share of the yellow house on the Greenbrier River Trail at Buckeye. We wanted a camp in the mountains, took one look, and bought in.

“Since then, we’ve had a few other houses and camps up here.

“We finally decided to eliminate the weekly drive, bought this house, sold our other house, moved here, and threw out the packing boxes – no going back!” she laughed.

While Allen is originally from the West End of Huntington, Merrily was born in Windsor, Ontario.

I asked her about the unusual spelling of her name.

“My name was originally Mary Lee,” she began. “One time, when I was an insufferable teenager, my mom, whose name was Mary Anne, opened a letter addressed to me – Mary.

“When I finished spewing, Mom calmly asked why I didn’t change the spelling of my name from Mary Lee to Merrily.

“Well, that hushed me up!

“And a few months later I did change the spelling.”

Merrily joined the Marlinton Woman’s Club and has been a real asset to the club, pitching right in with the kettle corn-making crew.

She brought a delicious, crusty round loaf of bread to a Woman’s Club meeting, one snowy night. The bread was from a “no knead” recipe.

She came across the recipe about 10 years ago in a New York Times article written by baking guru and owner of Manhattan’s Sullivan Street Bakery Jim Lahey.

“Lahey was a master baker, so I knew it would have to be a good recipe, plus I was intrigued by the idea of a bread that was made without kneading,” she explained.

Merrily graciously invited Suzanne Stewart and me to lunch and to get a few breadmaking pointers.

Merrily’s kitchen is bright and cheery, with a small antique maple table in the center of the room.

It’s on this table that Merrily prepares her breads and pastries.

“Maple is the perfect wood for working with bread,” Merrily said. “It holds the oil in so it’s preferred for working pastry and kneading bread.

“That’s why so many rolling pins are made from maple.”

She put two loaves of bread she’d prepared the night before into the oven, and we watched as she mixed up another batch of dough – which literally took just a few minutes.

That batch was put aside to raise and to be baked the next day.

Merrily said she didn’t have a favorite kind of bread, she just flitted from one to another.

“Last year I made rye bread so much that Allen got sick of it,” she said.

“But I guess the bread I make the most is my mother’s recipe for crescent rolls.

“Mom taught me how to make bread when I was about seven. She always made crescent rolls for Sunday dinner so that’s where I started.”

While we sat at the dining room table, enjoying the wafting aroma of baking bread, Merrily served hot tea and gave us some baking tips.

“My baking got so much better when I started using a thermometer,” she began.

And how one measures is key.

“Measure your flour in grams on a scale,” Merrily said. “Pour or place it in measuring cups – don’t dip it up – that tends to pack it down too much.”

Also, it helps to know something about flour.

“You can tell the difference between bleached and unbleached flour – it tastes different,” Merrily said. “I like to use unbleached, all purpose flour for all my breads. It just tastes better.”

King flour is a hard flour (high in protein)- which bakes a harder bread.

Queen flour is a soft (or weak) flour better suited for pastries.

All purpose flour falls in the middle.

For her bread baking, Merrily isn’t fussy about brand preference.

“My favorite flour is the cheap one,” she said. “I haven’t noticed any difference between the artisanal and the store brand flours.”

Merrily said it’s also good to know a little something about yeasts.

First of all, when you store yeast, date it and put it in the fridge. It will keep for two years.

And there’s a difference in how to dissolve different kinds of yeast.

For bread machine recipes, yeast should be dissolved in 115-degree water.

Temperature plays an important role in baking – and not just in dissolving yeast.

You know your baked goods are done by their internal temperature.

“You stick the thermometer into the center and take a reading,” Merrily explained. “Bread should be 200 degrees, and rolls and cakes 190 degrees.”

And who knew that “singing” was a baking term?

When the bread was done, Merrily carefully lifted the two very hot casseroles out of the oven and immediately turned out each round, crusty loaf onto wire racks to cool.

They came out smelling nutty and carmelized and yes, they were “singing.”

“That’s the bread shrinking and crackling as it cools,” Merrily said, smiling.

She sliced and served the bread warm with a fresh green salad and bowls of her mother’s Portuguese soup – called Caldo Verdura. (See recipe in What’s Cookin’? on page 4).

Merrily explained that her mom is Canadian and grew up during the Depression in an immigrant neighborhood in Windsor, Ontario, where this soup was common and “you can put almost anything in it,” she said.

“Everyone had a garden in their little backyard, so greens and vegetables were plentiful,” she said.

I asked Merrily what she thought about the recent resurgence of interest in cooking and old fashioned crafts and skills.

“I’d like to think that we realize that something is being lost and we want to save it,” she said.

“After all the stories we’ve heard from our grandmothers, maybe we just want to preserve a little piece of something.”

We agreed that cooking and sharing food is one of the most pleasurable and important ways to connect with people.

“One of my favorite words is companion,” she said, smiling. “It means ‘with bread.’

“The best way to make a friend or break down an enemy is to feed them.

“Khalil Gibran said, and I’m paraphrasing,” Merrily added, “If you make bread but love not the baking, you make a bitter bread that feeds half a man’s hunger.”

This is a long, slow ferment. It is ready when the surface is dotted with bubbles.

“This recipe yields a particularly wet dough – use a lot of flour on your work surface,” Merrily cautions.

And “treat the dough gently so you don’t de-gas it,” she adds.

Turn out the dough in one blob. It will cling to the bowl in long, thread-like strands and be loose and sticky – don’t add more flour. Lightly flour your hands and gently turn the edges to the center.

Flour the top and cover and let it rise for 2 hours (until double in size).

It’s done in this stage of rising when a finger poke springs back.

Casserole and lid will take about 1/2 hour to come to temperature.

When dough is finished rising, remove casserole from oven and place dough gently inside. Gently shake to settle it, cover and bake 30 minutes at 450º.

Remove lid and continue baking until bread is deep brown – about 12 to 30 minutes.

Pour bread out of the casserole immediately and cool on a wire rack for about an hour.

Merrily notes: “You may slice and enjoy it immediately, as I like to do, even though, as all bread bakers will tell you, if you slice bread while it is hot, it will turn gummy. But, oh, my, it’s wonderful when it’s hot – so, really, who cares?” 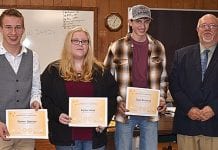 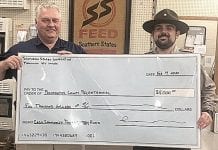 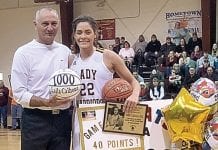 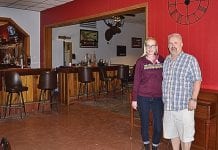 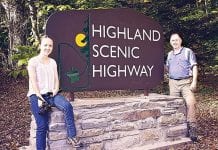