After a few hours of zig-zagging down the slopes at Snowshoe Mountain Resort, there’s nothing better than a nice warm, crunchy and sweet treat to renew the energy of skiers and snowboarders alike. Luckily, located right across from the Ballhooter chairlift is the Waffle Cabin.

It’s a small and cozy cabin that has a very simple menu – Belgian sugar waffles and hot and cold beverages.

Owned and operated by Gordon McHugh, the Waffle Cabin came to Snowshoe in 2013.

“Waffle Cabin is a franchise,” McHugh said. “It started in New England in 1999. They expanded, and they started franchising in 2012. We heard about it and said, ‘that sounds like fun.’”

The franchise was founded by Peter Creyf and Ingrid Heyrman, who had a simple dream – to sell waffles.

“This is his recipe,” McHugh said of the waffles. “It’s a Belgian sugar waffle or Liege style. He’s a dough master. He had to apprentice in Belgium under a dough maker and it’s a big deal. These are the hot dogs of Belgium. In America, we have hot dogs. On every street corner in Belgium, this waffle is sold.”

When McHugh opened his franchise, he didn’t have to travel to Belgium, but he did have to take a course to learn the ins and outs of making the special waffles.

“It’s a dough-based product,” he said. “It’s not batter. It’s closer to bread. We take our dough balls, put them in a proofer. The dough rises and you cook it. The magic is, the dough has what is called pearl sugar in it, and it caramelizes quickly. When we cook them in the waffle irons, it gives it a depth of flavor.”

The pearl sugar adds enough flavor to the waffles that there is no need for toppings, which is a good thing, because the only topping you’ll find at the Waffle Cabin is a Belgian chocolate drizzle.

McHugh has had such great success with the Waffle Cabin, that he has opened a second cabin at Silver Creek.

“We have a fan club,” he said. “All kinds of folks like Waffle Cabin. I’ve heard that parents say whenever they talk about going to Snowshoe, the first thing the kids say is, ‘can we go to Waffle Cabin?’ It’s fun. The kids love it – kids of all ages.”

The best part about the Waffle Cabin is that skilled skiers don’t even need to take their skis off to order. They ski up onto the front deck of the cabin, order and wait while their waffle is made.

“They just come up here, grab it and go,” McHugh said.

As a native of Gatlinburg, Tennessee, McHugh said he is used to the tourism industry and loves being a part of the Snowshoe experience.

“I came to Snowshoe in the mid-nineties,” he said. “I was a ski instructor for many years. I’ve been in the ski business since I was a kid. I came here as an instructor and worked many winters here. Spent summers here. I was the golf pro at the Raven for a few years and then I was just looking for a little bit of a career change.”

With that career change, McHugh has found happiness.

A hearty winter feast to enjoy in or out of doors 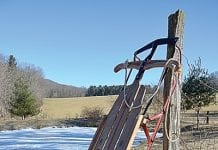 A sleigh ride through history 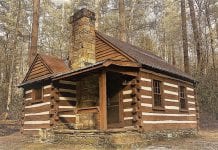 A Valentine from Watoga State Park